Are the Rolling Stones a bunch of guys who live in your blood? Or – are they a bunch of hooligans that penned many great songs yet would never attend brunch at your parents’ place …?

The response to the above; extremely important to an insight of the documentary – Crossfire Hurricane.

A diehard fan knows the stories. A passing fan will be surprised by the history of the band. A music fan will be impressed and suddenly hold the Stones in a higher realm. Young Stones’, passing or music fanatics will be astounded by the route the ‘ bad boys’ of rock n’roll chose to arrive on top of the heap. It was not easy for Mick and the boys yet boy did they have fun …

A history lesson evolves before the eyes.

Music fans raised on Eminem, Hip Hop, Rap or any artist who is or was considered a ‘hellraiser’ or ‘ anti – establishment’ , should watch and learn from the masters. The Stones opened the fridge doors for everyone who followed to steal a beer and toast the police. Fifty years later, any member of the Stones makes every cool person in music pale in comparison.

And you thought Gun n’ Roses were bad …? 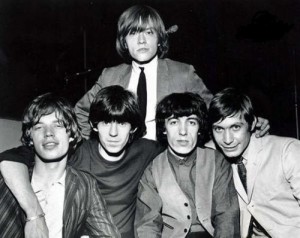 Crossfire Hurricane delivers the message which the Stones’ first manager concoted in a very brilliant way. It leaves the audience with a taste of the coreness of evil which appeared to exude from Mick, Keith, Charlie, Brian, Bill, Mick Taylor and Ronnie Wood. Andrew Loog Oldham never bothered to demonstrate the other sides of the Stones. The relationships, the songwriting – all the normalcy included in every person’s DNA. Oldham created myths, the Stones became the myths and continued to rape and pillage for the following forty -five years.

The film offers more of the same. Why not? It works …..

Early concert footage demonstates the boys as a bunch of kids who wanted to play music and were thrust into an era ripe to gather no moss. Thanks to Oldham, they were anti – Beatles, anti – government and anti – everything. The film drives this message ‘ right down your throat’. Intermittenly dotting the tale with the Stones’ dominant and signature ( if not evil ) songs.

Much of the band’s musical legacy is left on the shelves in the way classic rock radio operates. A non- fan , because of this – assumes the Stones’ makeup consists of the same amount of hits as Aerosmith or Bon Jovi. The film excluding all the acoustic gems from Beggars Banquet, the back-to-blues basics of Sticky Fingers and the Eden -esque blend of both on Let it Bleed. The grittiest repetoire ever on Exile on Main Street? Hidden by the excesses which created the songbook second only to the Beatles.

At the quarter century mark of the band’s existence, a film was released with the title 25×5; The Complete History of the Rolling Stones. In many ways, that film contained a more profound look into the pyches of the group. Crossfire Hurricane, amid the fanfare of a half century celebration,sh ows never before seen footage with a running commentary by the Stones. Some words new – many old. It is a moving picture cousin to the coffee table book released in October.

There exists no modern day images of the men who are now in their late sixties and early seventies. There is no footage of the band post -1981 save for their appearance in Scorceses’ documentary / concert film in 2006. The film ends as the Peter Pan of rock gyrates to the song ‘All Down the Line‘ from Exile on Main Street.The wrinkled survivor Richards on one side – the ‘new’ Stone, Ronnie Wood, on the other…

Behind everyone beats the heart of the Rolling Stones. A man whose drumming ways – provide the most insightful quote of the film. Former and original bassist Bill Wyman explaining how drummer Watts follows Richards and not the other way around like most bands. This according to Wyman, places Watts and the other member of the battery – nano seconds behind. ‘A dangerous place to be’ says William Perks aka Wyman. ‘At any minute, the whole thing can fall apart’.

Much like the Jagger – Richards relationship, Keith ‘s body, Wood’s sobriety and the Stones themselves.

After fifty years, maybe everyone should listen to Charlie. Including the great grandchildren serving brunch …

One thought on “Crossfire Hurricane ; A Review of the Rolling Stones Documentary”