This Hungarian refugee, currently living in Toronto, had a dream. To play music and make people happy. He arrived in Canada with family in tow and – following tutelages with the likes of Oscar Peterson, his dream is closer than before.

As the lead trumpet player for the Duke Ellington Orchestra to the same role with Garou‘s band; The Untouchables …

Roger Walls has seen and heard everything. 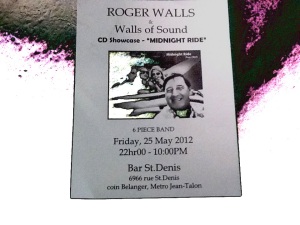 All this experience is parlayed into Walls’ new C.D Midnight Ride. The album is a collection of eleven original recordings based on his fifty years on the road and in the studio.

According to Roger, the album was created by his experiences touring abroad. Japan, Brazil and all of Europe are ingredients to a flavorful stew of Jazz styles.

Want funky blues along the lines of Art Blakey and Freddie Hubbard? Soon come young blues, the centerpiece of the album – is the tune to light up your toes and ignite your soul. The song has been a staple on 91.9 Planete Jazz for six months and reached number one on the Planete Jazz and Reverbnation charts. It remained on top for a year on Reverbnation.

Roger and his six piece band are showcasing the CD on the 25th of May 2012 at Bar St. Denis.  For a great evening of Jazz – join Roger along with some of the best jazz musicians in Montreal.

Stay tuned for a feature story about Roger’s life …

To get a taste of Roger’s music check him out with the Duke Ellington Orchestra!

Witness the recording of the new CD – Midnight Ride

Have a band or want publicity as a solo artist? Contact me at keenerick@hotmail.com