Christine Jensen has a new album out.

Habitat will be released on October 1st in stores near you. This release will be followed by a live show on October 3rd at Lion D’Or as part of the Off Festival. Christine’s latest ‘opus’ is a labor of love …

” Every time I do a large ensemble thing like this, it’s not a short event.” Explains Christine from her home in Montreal.” There are a lot of pieces that have to be put in place which includes writing the music …”

An album this size takes Christine about three years to complete. Eighteen musicians take part in what Jensen describes as short stories. Each song has a different theme and they all contain spontaneity. Slightly organized tunes which contain great rhythms – something which Christine adores …

” This is Jazz.” Says Christine.” It is so different than most types of music. I have to structure everything down and when we go to record we get about two days in the studio, as opposed to what may sound like months and months and months. Just to do the live stuff – it’s all about capturing the live element of the music.”

Christine Jensen is foremost a Saxaphone player and a current Montrealer.

Originally from Sechelt, British Columbia, she grew up in Nanaimo and learned her craft among some of Canada’s finest crop of musicians. Diana Krall, David Gogo and her sister Ingrid to name but three. Once in Montreal, Christine obtained her Bachelor and Masters degrees from McGill University. She has studied with Pat LaBarbera, Kenny Werner, Jim McNeely, Remi Bolduc, Dick Oatts and Steve Wilson. People who have taught Christine well in the city she calls the greatest in the world for musical talent …

“We have our struggles in this Province …” Admits Christine. ” But those struggles also help us to band together. The struggles add to the dimension for this need of creation here.  There is no better place than Montreal.”

Habitat is the second disc of such magnitude for Jensen. Treelines (released in 2010) won Christine a Juno award yet the new album was much easier to complete. Christine’s experience from the first – enabling an ‘easier’ go the second time around.

The new album from The Christine Jensen  Jazz Orchestra, is composed of six parts, all arranged and composed by Jensen and dotted by the places that inspired her. From the Prairies to Port-au-Prince, Peru to Brooklyn; Jensen’s new album is the most inspired project she has released. Particularly the song; ‘Nishiyuu’. One of six tracks on the album ‘Habitat’.

” This is my most political piece although it is not political per say … ” Explains Christine. ” It’s about the march the Cree young men took from up North this past winter to Ottawa. It took them three months through the winter. I thought it was a beautiful and a hopeful journey they went through. If I had undertaken something like that, I liken it to climbing  Mount Everest  – I’d probably get a lot of satisfaction from it. Like you went somewhere on your journey. These young men went through some deplorable situations to send a message.’

Jensen came up with the name for her album for a reason. Her ‘habitat’ is a concept as an artist thinking in architectural terms as a place where her songs can live. Her ‘children’ – safe for now as Christine tends to live in the moment. Each older piece from ‘Treelines’ – safely and respectively placed in the past. Jensen does not write things in an hour – the most recent compositions are loved the most …

Christine is also a world traveler. She has played all over the world and those experiences have taught her ‘global’ lessons in music. ‘Academic’  truths based in ‘Alchemy’ …?

“It’s funny – every Country has it’s own flavor when they approach music.” Explains Jensen. ” There remains a common underlying theme. We are all well versed in what I call ‘Big Band writing’ in terms of executing and interpreting it. Yet there is always a different sound with each band. I am sure in Classical music it’s the same. If you play Beethoven’s 9th Symphony in England or Spain – you will get a different interpretation of it …” 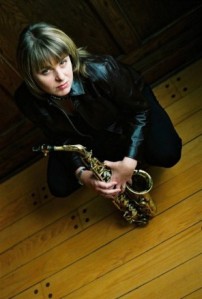 One thing which does not need interpretation is Christine’s view on the new age of selling records. The new age of the record industry. An era which Christine believes is good and bad …

” Technology has a changed a few things … I find it is so hard out there to crack open, to get your music out there.” Explains Jensen.

“You have to find every opportunity to do that. The game has a changed a lot over the years. To do large ensemble compositions takes a lot of time and energy and you have to want to do the other side of the business as well. It is a huge investment to do this type of thing. I hope there is someone out there who can help a little bit. My thing is to tell people to buy hard copies of musicians’ works. It’s the only time we see money. ”

Jensen also believes we live in a ‘fast’ throwaway society, especially when it comes to music. Guys like The Beatles and Micheal Jackson – may not be as huge today because of the nature of speed which artists disappear.

Christine’s personal choices as ‘idols’ are vast and somewhat universal.

Jensen believes the trick is to find an individual voice when choosing an instrument. Something which she believes takes a long time, self – analysis and focus. According to Christine – Jazz is much like Classical in the way that the goal is to be individualistic within a group. Alone but together. 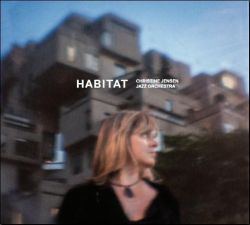 Christine Jensen will be performing all her new songs on Thursday at Lion D’Or. She will also toss older ones into the mix as she plays with her eighteen piece orchestra.

That’s a lot of people …

On her new album; Habitat.