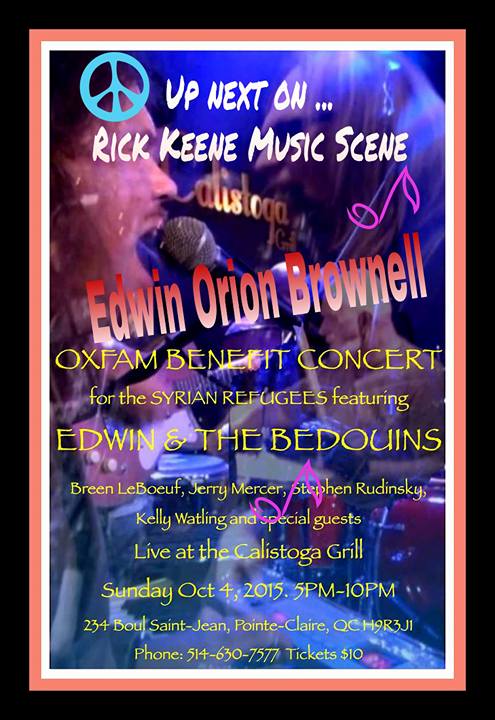 Whether he is playing piano and entertaining the ‘troops’ at old age homes across Canada, composing and performing classical piano and educating the music world with Mozart and Bach or ‘just’ playing good ol’ Rock n’ Roll with famous Rock stars – one thing is certain.

If all the above were not enough, Edwin also ‘jumps’ to arms if some form of humanity is suffering and requires fundraising efforts. Mr. Brownell usually grabs his band of merry men, aka The Bedouins, and puts on a heck of a show to raise money on  behalf of the humans in question.

Now, The Bedouins are not your pack of ordinary musicians. They are Quebec’s version of a Rock n Roll Rat Pack. Seasoned performers in the twi -light of their careers, banding together to give to the poor and suffering.

Please listen to my interview with Edwin Brownell and Edwin Orion Brownell. ‘They’ will tell you all about the fundraising effort on Oct. 4th at Calistoga Grill in Pte. Claire and the names of his Rat Pack.