The word legendary. Tossed around like a flea – bit peanut monkey sometimes.

In the case of Dr. Lonnie Smith – it is he who is tossing the primate around … 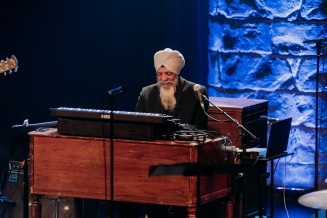 Commencing his career in the late fifties alongside George Benson – Smith used his knowledge as a multi-instrumentalist and student of Jazz, Blues, Gospel and R&B to rise to the top of the Jazz world as master of the Hammond B3 organ.

Dr. Lonnie Smith has been the most sought after player in the Jazz world for over four decades and at Le Gesu as part of The Jazz festival, the good doctor and his trio showed why.

Jonathan Kreisberg and Jonathan Blake are both powerhouses in their own right. Trading unique craftsmanship with each other with Smith holding back to let them shine. If not for Smith’s ‘ jolt you from the seats’ playing – Kresiberg and Blake almost legendary themselves. Blake especially on the drums, combining fierceness and finesse – power and purring to go with a genius’ work. Some Jazz leaders are perfectionists by birth. Not allowing others to breathe within a song as their visions are superior to others in their own advanced minds. Dr. Lonnie Smith is a genius as he paints with his ‘paint box’ in front of him yet he allows his trio to paint with him. He is the teacher yet his lessons are by participation and not by dissociation. Guiding – yes. Ruling with a steel hand – indefinably no. 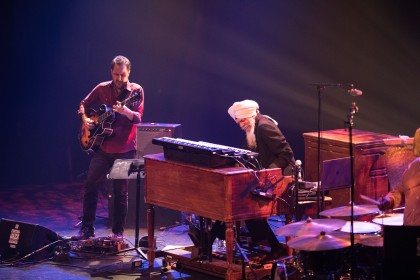 What some have done for their instruments ( Hendrix on guitar) in the public eye – Smith has done for the Hammond B3 organ in not only the Jazz world, the music world period.

They don’t give the NEC Jazz Award to just anyone after all.