Steve Hackett is better known as the lead guitarist with Genesis.

Following his departure from Genesis after the album Wind and Wuthering was released, Steve Hackett has continued his musical prowess and education.

Adept in Classical, Blues and really – every style of music, Steve Hackett is a true writer, composer and player. 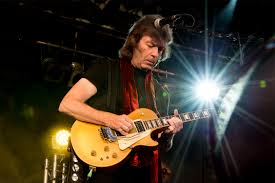 Please listen below to Part One of my interview with Steve as he speaks of his new album Wolflight. Stay tuned for Part Two as the possibility of any Genesis reunion is discussed.